"Between Gears" by Natalie Nourigat

“Was I ever so young?”  That’s the question that pops into my mind as I read the bio-comic Between Gears TP

by Natalie Nourigat.  The answer is: Yes, but I don't remember it that way. One reason is because I lacked the discipline and perseverance to document a full year of that youth.

“Between Gears” is a slice-of-life diary of Nourigat’s senior year in college.  It begins September 17th as she returns to school, and wraps up on June 14th, a couple days after graduation when she moves back to Portland.  “Between Gears” is similar to a blog, or the original diarist, Samuel Pepys, but the comic form makes it more accessible, each page bringing a day to life using only five to ten panels.

I’ve seen many autobiographical comics, but unless the author has a good hook, like in Maus: A Survivor's Tale

, or an epic story such as Marjane Satrapi’s Persepolis

, the challenge is for the author to bring structure to daily life.  Nourigat only touches on this tangentially, opting instead to highlight the plot twists that make days memorable: finding a cat in an alley, spending a happy-hour eating nachos with a friend, or a successful trip to Emerald City Comic Con.  For the most part, her microscope finds some interesting moments. 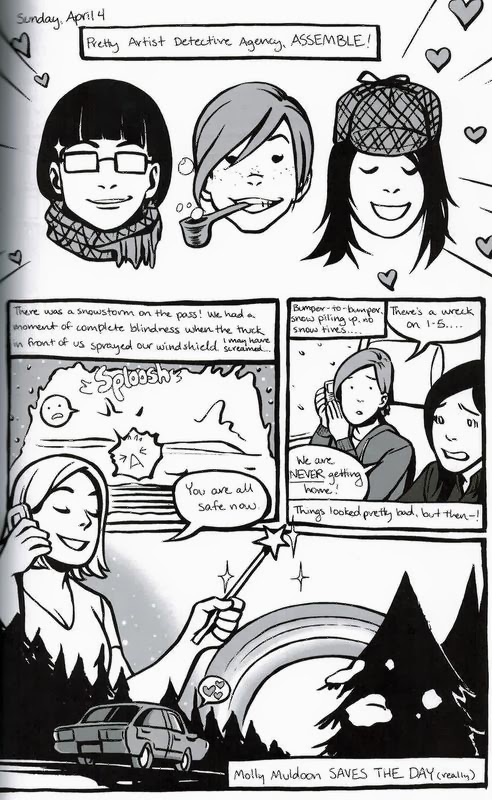 Nourigat has a deft hand for cartooning, jumping from mini-manga, to heavier line caricatures, and tossing in the occasional larger, more detailed drawings.  Most of the style reminds me of something between Scott Pilgrim and Raina Telgemeier's Smile.  I also appreciated the bonus material at the end that describes her process.

As a diarist, Nourigat chooses not to push any boundaries.  There’s not a lot of tension in the comic, especially on any day. The major crises that arise are: tonsillectomy, whether to participate in a Japanese immersion program, and whether she will be successful in her bid to become an artist or whether she’ll succumb to a “salary job.”  (Spoiler: if you're reading “Between Gears” you know the answer to the last question.)  Day-to-day problems concern spiders, lost debit cards, sudden rainstorms, and mildly embarrassing situations.  Even her relationship with a boyfriend arrives quietly like a cat, and leaves with only a slight bump. (Like a dog pushing open a screen door?) 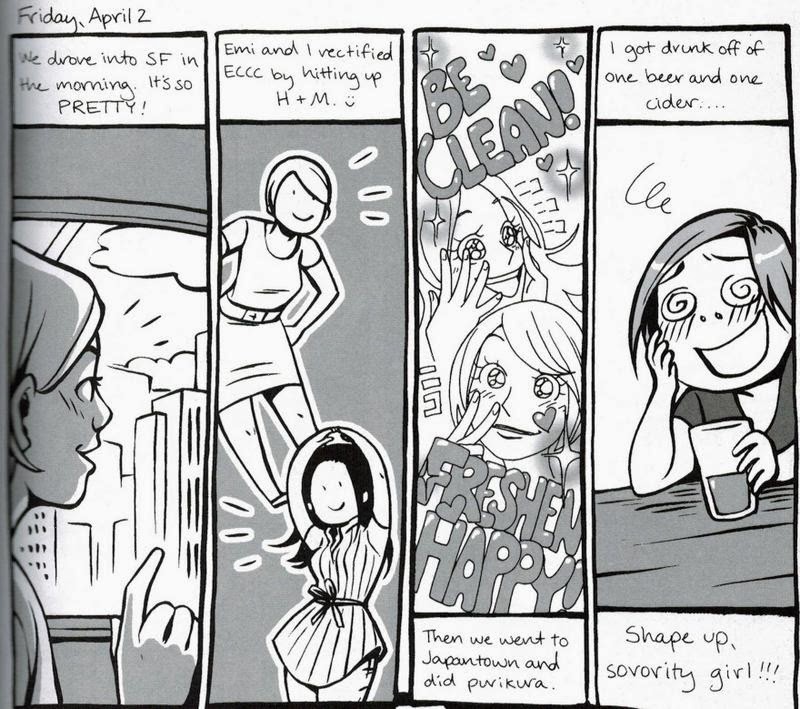 Perhaps because this diary was created to be published, Nourigat omits some of her more personal issues. She mentions this in the bonus material.  Yet, I felt there were too many things left unexplained.  I’m accustomed to an author like Patrick O’Brien throwing a situation out there, and leaving it untouched for a couple pages, but in “Changing Gears,” some things were permanently unexplained.  I read twenty pages before I understood that “J.E.T.” had to do with the Japanese exchange program.  There were also references to her friend Emi’s bio-comic EmiTown that could have been expanded.  Is this on purpose, or due to an oversight?  I would have liked to have seen fewer assumptions made regarding people and events from Natalie Nourigat’s Portland comics world that appeared and disappeared but without much elucidation.

The ending makes a conscious effort to bring the story to a close, and that worked for me. After hundreds of pages, I was enamored of her character, but I was also ready for her to move on to life after college.  Some day, when she’s even more accomplished, she’ll look back on “Changing Gears,” and think “Was I ever this young?” and the answer will be there, in book form, the young Natalie, living life day-by-day on the page of this charming bio comic.
Natalie Nourigat works with Periscope Studios in Portland, Oregon.  Her art can be seen on Deviant Art, and on her website natalienourigat.com. "Between Gears" has been nominated for the 2014 Oregon Book Awards (OBA) in the Graphic Novel category.