Last spring at Stumptown Comics Fest Jeff Parker of Marvel Comics wondered whether weekly print comics would continue in the future. He theorized that monthlies will eventually be entirely online, and the only tangible printings will be TPBs or anthologies. While I haven't seen mainstream comics changing to weekly web versions, I notice that two of the notable Graphic Novels from 2009 are exactly this: web comics compiled and printed by larger publishers. 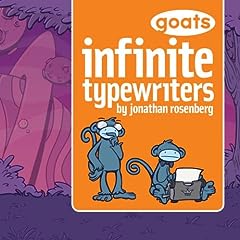 Goats: Infinite Typewriters by Jonathan Rosenberg is a nicely bound paperback printing of a couple hundred of the webcomics. It's the first in a trilogy, followed by The Corndog Imperative and The Showcase Showdown. While it's a collection of strips, they fit nicely together to tell ongoing stories of the origin of Diablo the Satanic chicken, his Machiavellian offspring Oliver, and other various humans, aliens and semi-intelligent animals. The plots usually involve God, Satan, Robert Goulet and some (cartoon) violence and (real) swearing. I'd have to say there was a laugh in every comic, which is a lot better record than anything printed in the newspapers today. My 12-year-old son, however, told me that Goats is not appropriate for younger kids, and while he meant his younger brother, I'd say that any adult should read it before giving Goats to a kid younger than 17. 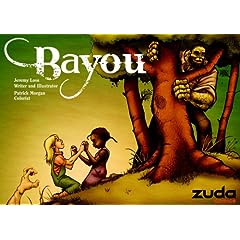 Bayou , on the other hand, is a book that Tweens should read. As Publisher's Weekly sums up:


Bayou follows a young African-American girl in 1930’s segregated Mississippi, who sets off on an adventure in a fantastical South to save her father, who is wrongly accused of a crime.


The crime is suspected kidnapping of Lee's young white friend Lily, and we see from Lee's point of view that the girl was eaten by a fantastical monster called Cotton-eye Joe.

Bayou has many great qualities. First, there's the art, which translates well to both the web and the page. The drawing are simple, without being cartoony -- unless it's called for by the story. The colors are well used to support the characters emotions and settings.

Then, there's the story itself. Love deals with the events frankly, whether it's looking for a dead boy in the swamp, killing a chicken for dinner, or two friends enjoying time together in a field. He weaves in the issues of racism and poverty without being preachy. The characters feel authentic.

And finally, the best part of Bayou is seeing the story from Lee's point of view. We don't know for sure whether the monsters of Bayou and Cotton-eye Joe are real or not, but they're real to her. When she sees sprites under the swampwater she can't believe her eyes, but because it's coming from this young girl it helps us believe them all the more.

Bayou is the first Zuda webcomic to make it to print and DC plans to release more print versions of original Zuda webcomics later this year.

You can read the webcomic here, or buy the Bayou paperback from Amazon.